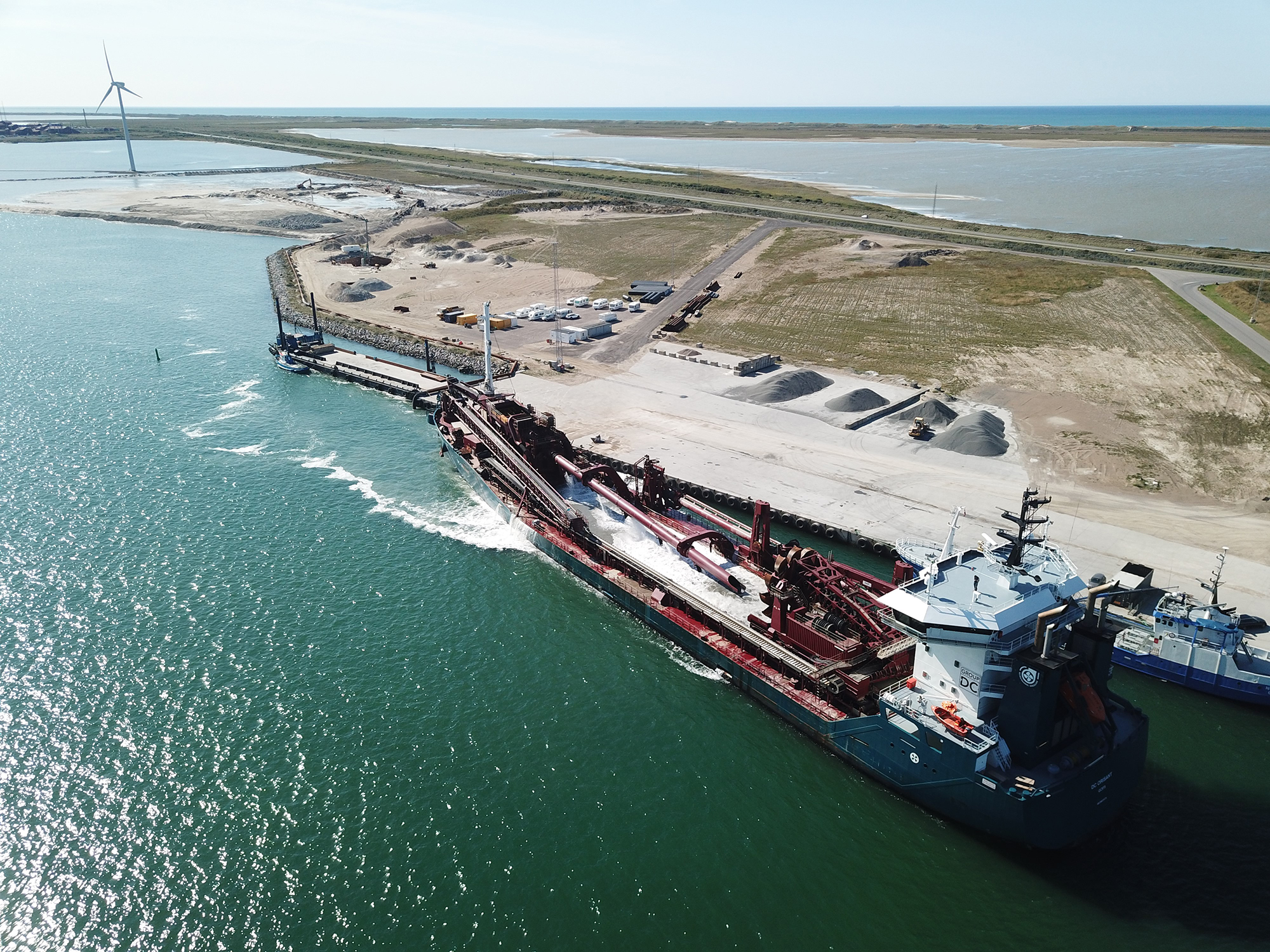 Increasing cargo activity at the Port of Thyboron in recent years and a desire to promote more transport by sea and reduce road transport and thus CO2 emissions formed the basis for another port expansion that is taking shape in Thyboron right now.

Cargo activity at the Port of Thyboron has been increasing since the 1990s, and has seen strong growth since 2015. Cargo passing through the port has remained stable at more than 1.7 million tonnes per year for the past five financial years, and came close to beating the 2017 record last year with over 1.76 million tonnes. Cargo and fishing now account for almost equal shares of the port’s revenue, and the port is on its way to a position among the ten largest cargo ports in Denmark.

There are now three cargo areas in full operation at the Port of Thyboron. The first area lies just inside the entrance at Langholmkaj, with quayside warehouses for storing bulk cargo – loose, and in big bags. The next is a customised bulk cargo terminal consisting of 100,000 m2 of land for sorting and handling sand and gravel, and an adjacent quay for receiving raw materials and shipping out final products to the construction industry. The last is a project cargo quay with a load capacity of 23 tonnes per square metre, for very heavy goods, and 150,000 m2 of adjacent land for the temporary storage of wind turbine foundations and main components etc., prior to disembarkation or installation in the North Sea. All the above quays currently have 9 metres of water depth.

Development of the port has accelerated since the Port of Thyboron became a self-governing municipal port in 2001. DKK 565 million has been invested in port facilities since then. Further investment of DKK 134 million is expected over the next two to three years, primarily to increase the water depth to 10 metres at the entrance in Thyboron Canal and for a new terminal in Sydhavnen for cargo.

Over the past five years, the Port of Thyboron has developed new port infrastructure for the maritime service sector in the form of a harbour basin for the largest floating dock on the Danish west coast, increased quay capacity and a new harbour basin for newbuildings. New facilities have also been developed for the offshore and shipping sector in the form of a heavy goods and project cargo quay. Last year, first-class new discharging facilities for pelagic and industrial fishing began operation, along with expanded quay capacity for Dutch and Belgian transit fishing for human consumption crews.

The latest new port expansion project is focusing 100% on the cargo segment. A new 220-metre quay and 150,000 m2 of adjacent land have been planned south of the harbour. These will be created utilising the material dredged while deepening Thyboron Canal, which will soon commence and is expected to be completed by late 2021.

The Port of Thyboron has seen increasing interest in recent years from companies that trade with Norway, Germany, Scotland, England, the Netherlands, Belgium, Greenland, Iceland and the Faroe Islands, who can see the advantages of storing goods on the Danish North Sea coast. This could be the temporary storage of bulk cargo prior to disembarkation or utilising a quayside buffer warehouse for delivery to customers in other Danish regions and our neighbouring countries around the North Sea. The upcoming port expansion will offer great potential for this type of activity.

It can make sense to rethink transport routes, for a range of reasons, and to sail into and out of Denmark from the west. This may be the reason for the growing interest in Thyboron. This offers the potential to avoid traffic jams on the congested road network in east Jutland, the bridge toll from Zealand and charges in the Kiel Canal for goods to and from Hamburg.

The new motorway north of Holstebro, a good connection near the quay to an uncongested highway, the port’s all-weather navigation and easy access to production facilities in Denmark, are opening up excellent opportunities for the bulk cargo sector in the years ahead at the Port of Thyboron.

Potential for the cargo segment

The port expansion will allow new cargo terminals and warehouses for storing bulk goods to be built, and give more companies the opportunity to get established in a quayside location, close to a main road, at the edge of the North Sea. The Port of Thyboron is being extended away from the town centre, parallel to the main road. The distance from quay to main road is therefore never more than 500 metres.

It is always very satisfying to be able to support the needs of our customers. We are very pleased to be able to support the cargo, logistics and shipping sectors through this project. As always, we are striving to give the industry excellent working conditions. We are particularly pleased to have the opportunity to support innovation and ensure a fluid transport flow, avoiding a congested road network and promoting more sustainable transport by sea. We are very keen as a port to support and invest in this trend.

The new quay for cargo activities is expected to commence operation in 2022, when the adjacent land will also be ready for logistics facilities to move in. 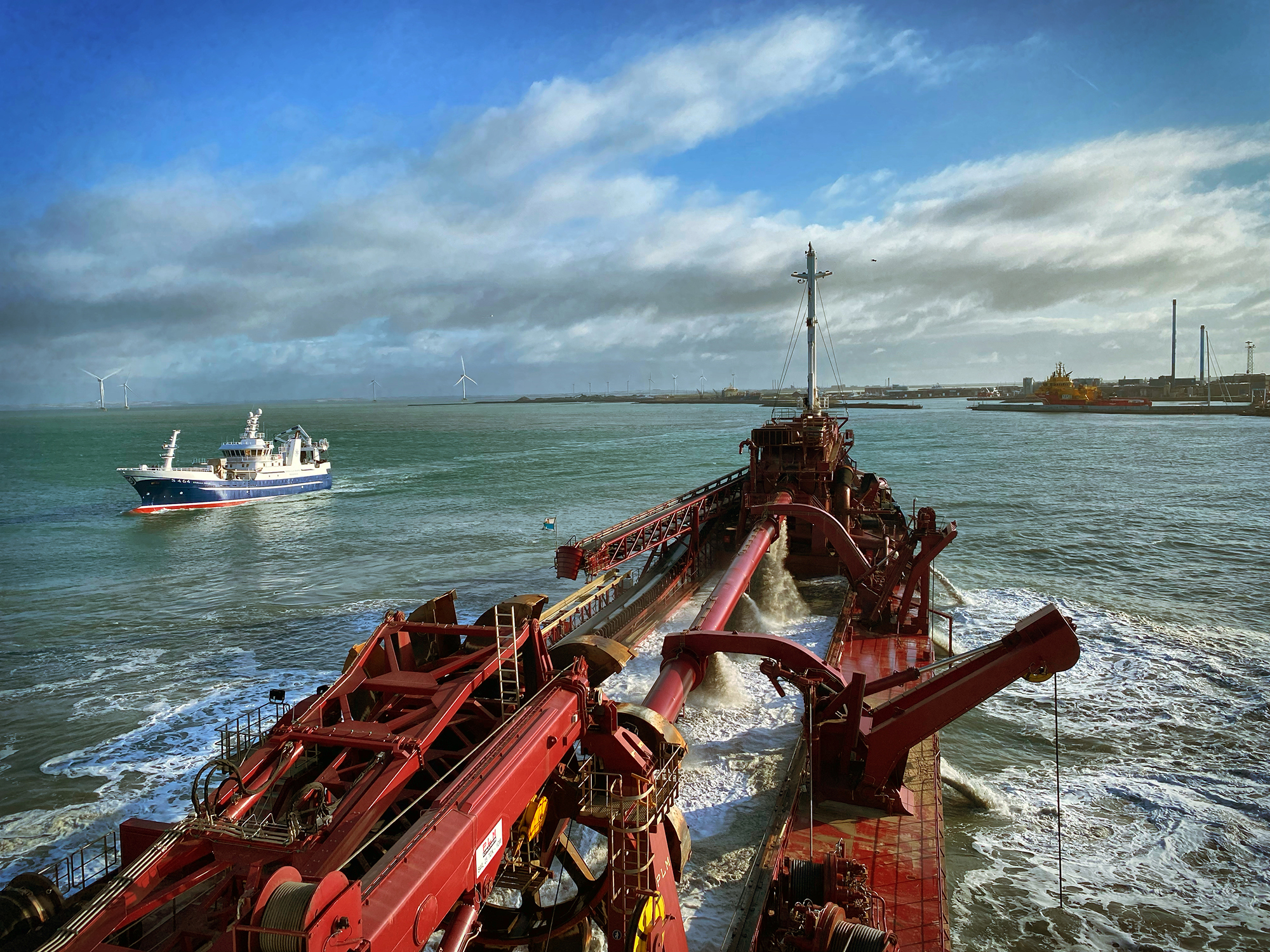 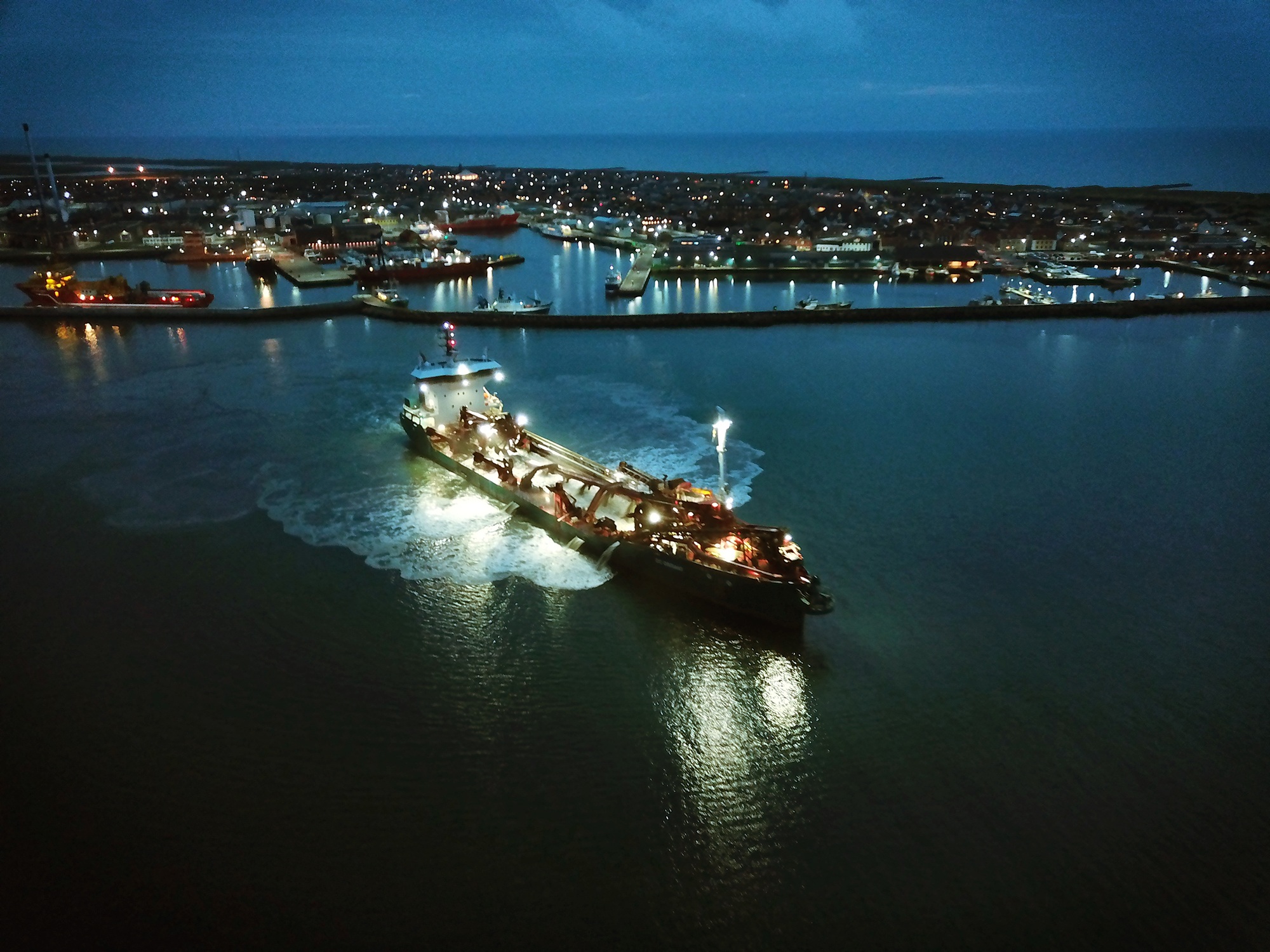 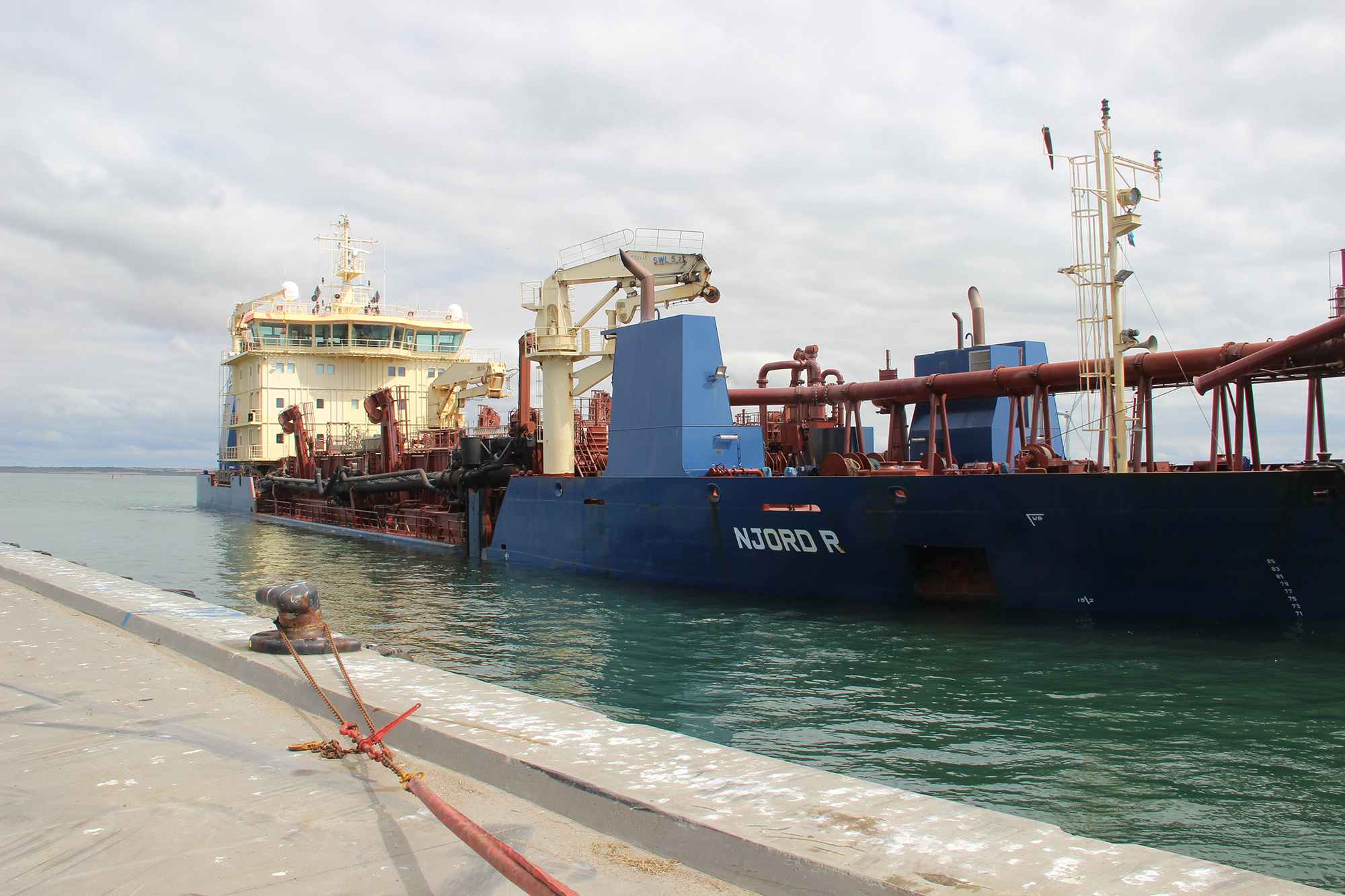 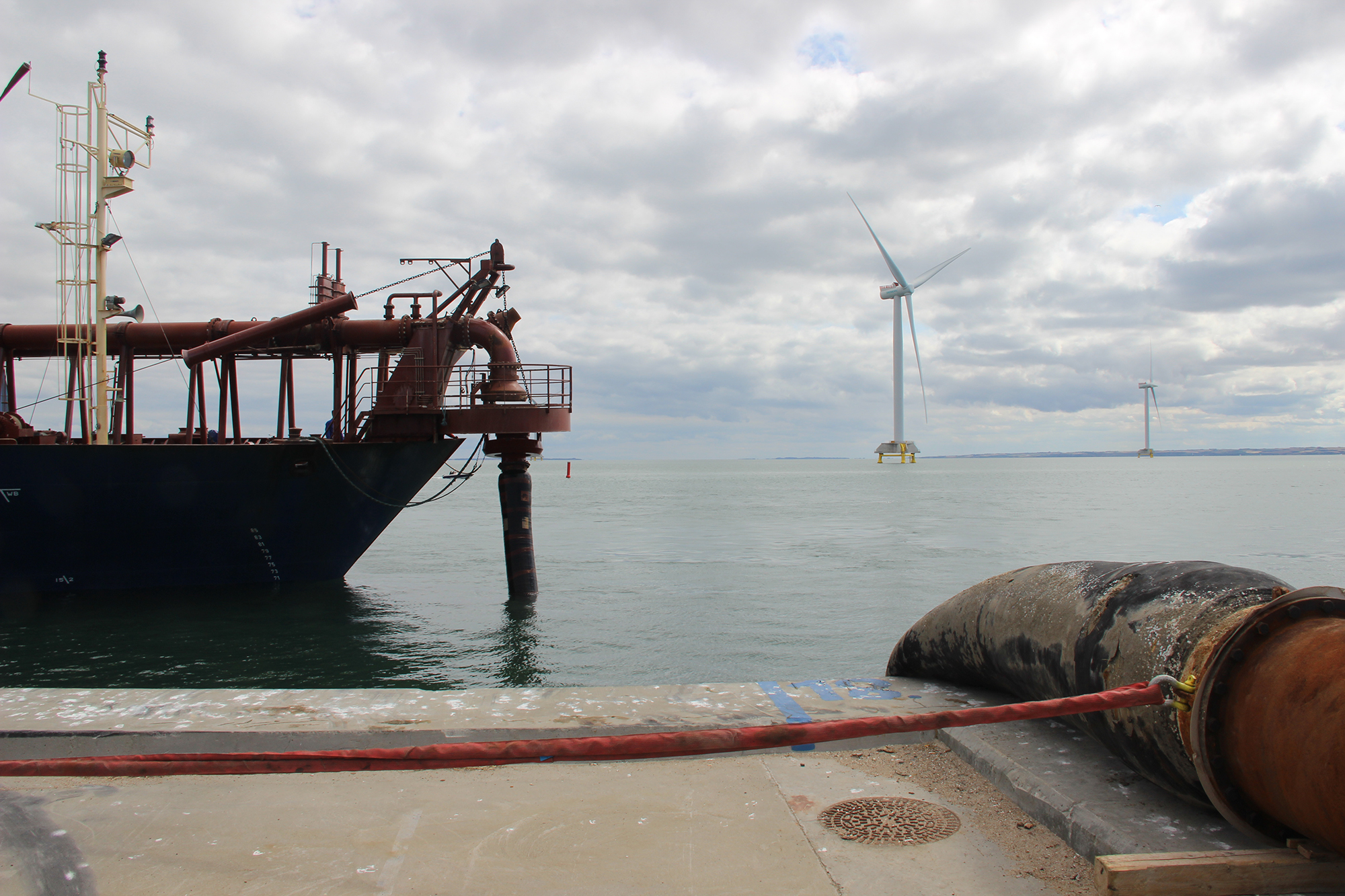 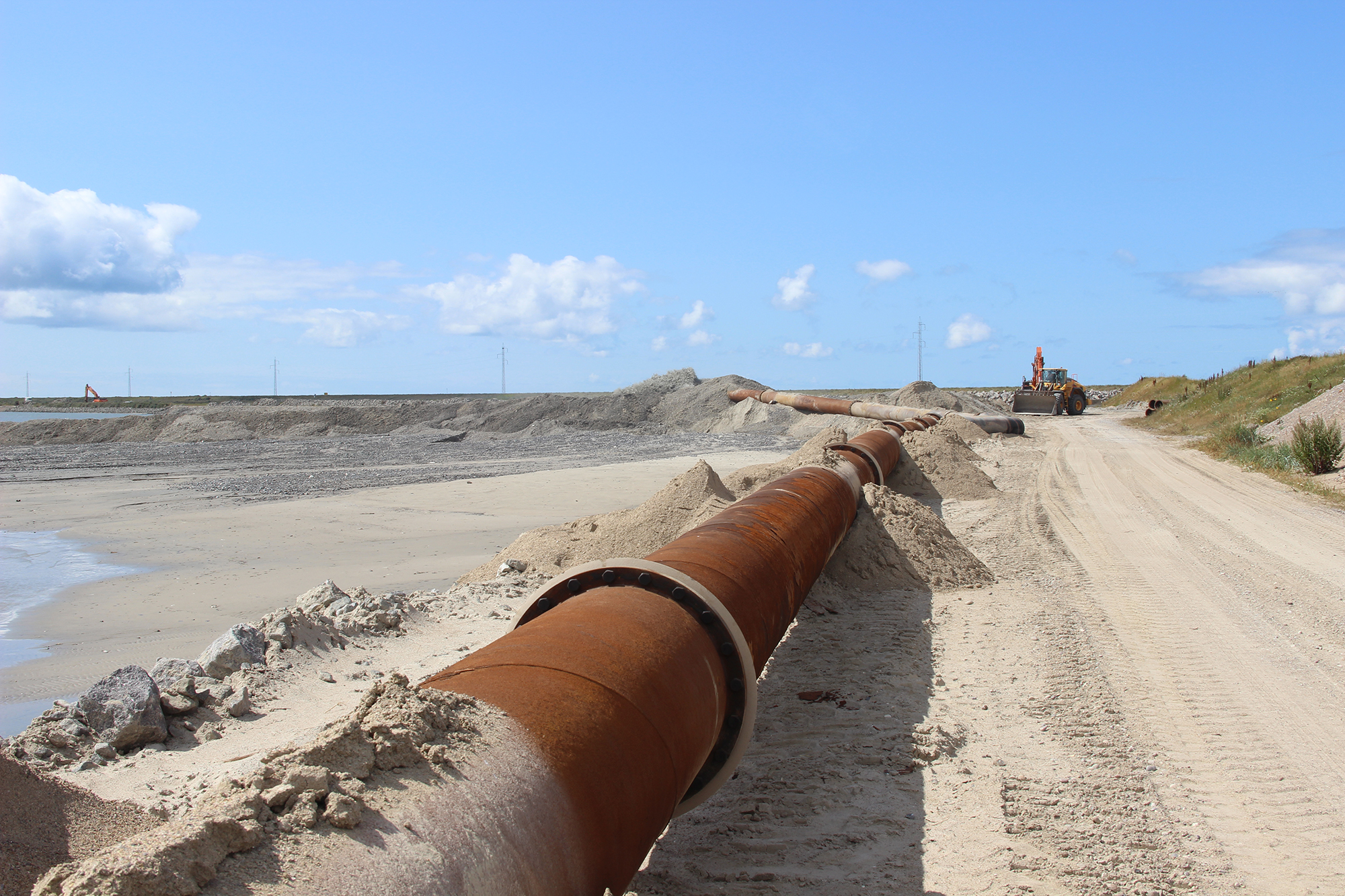 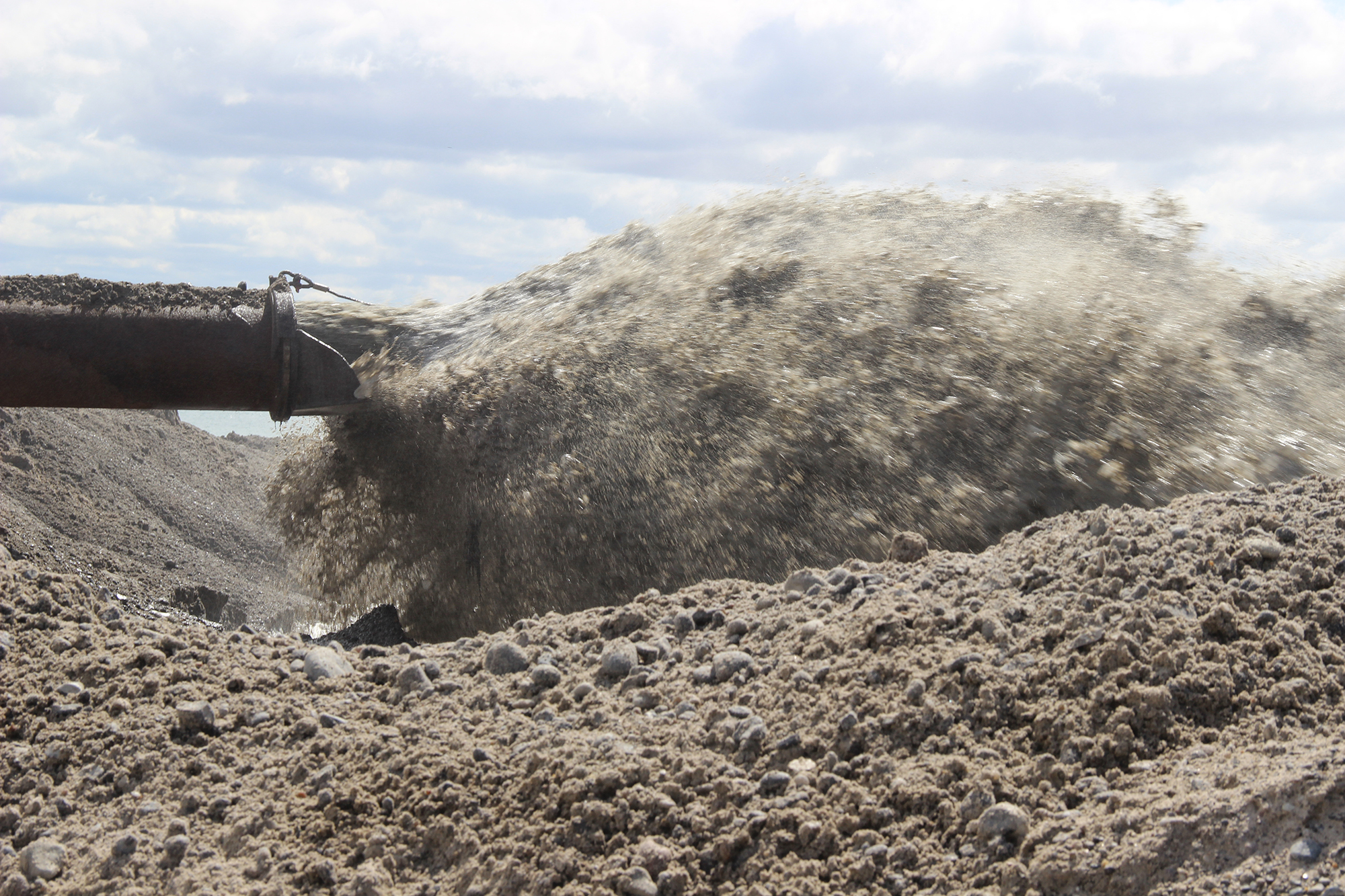 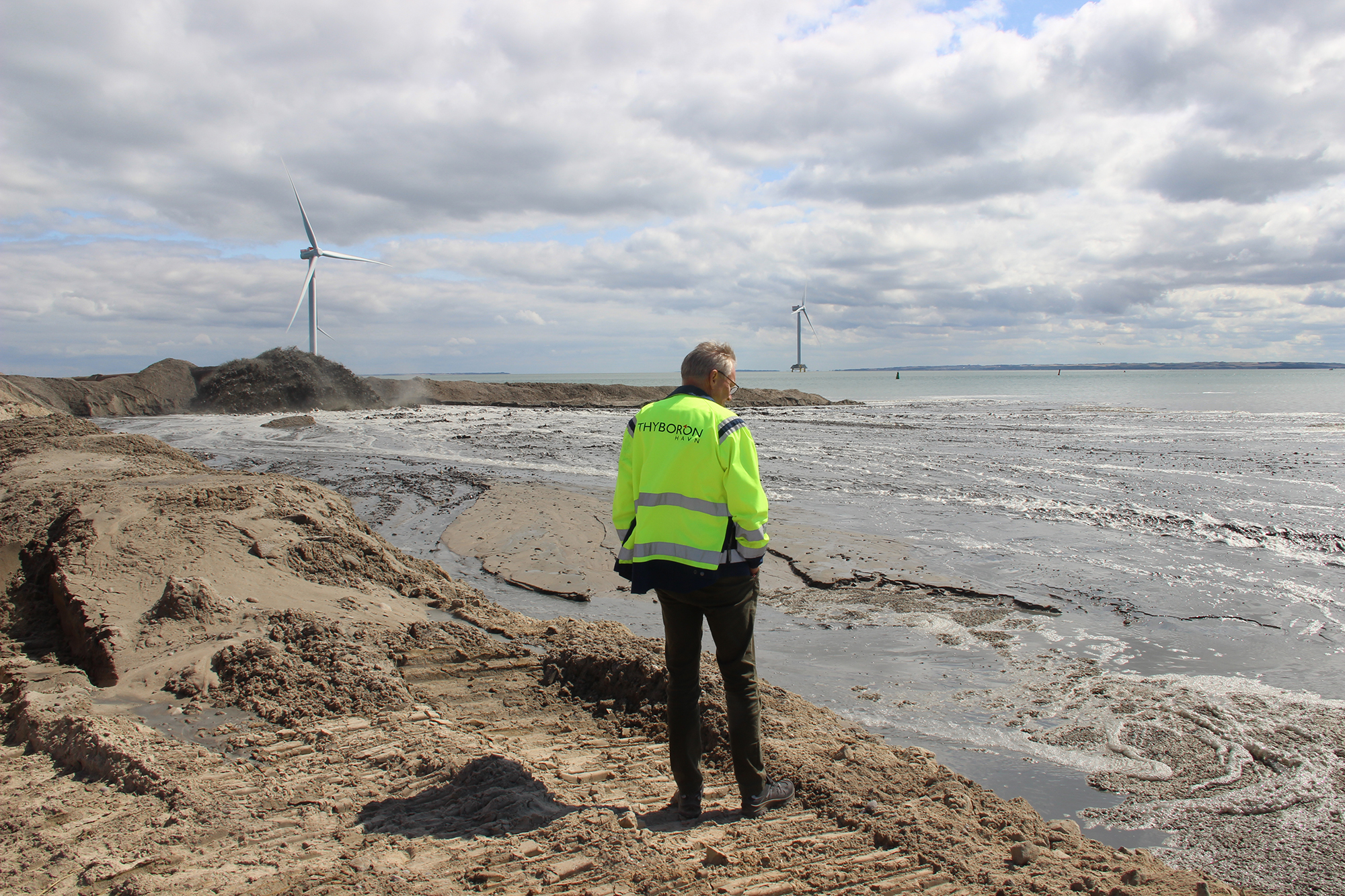 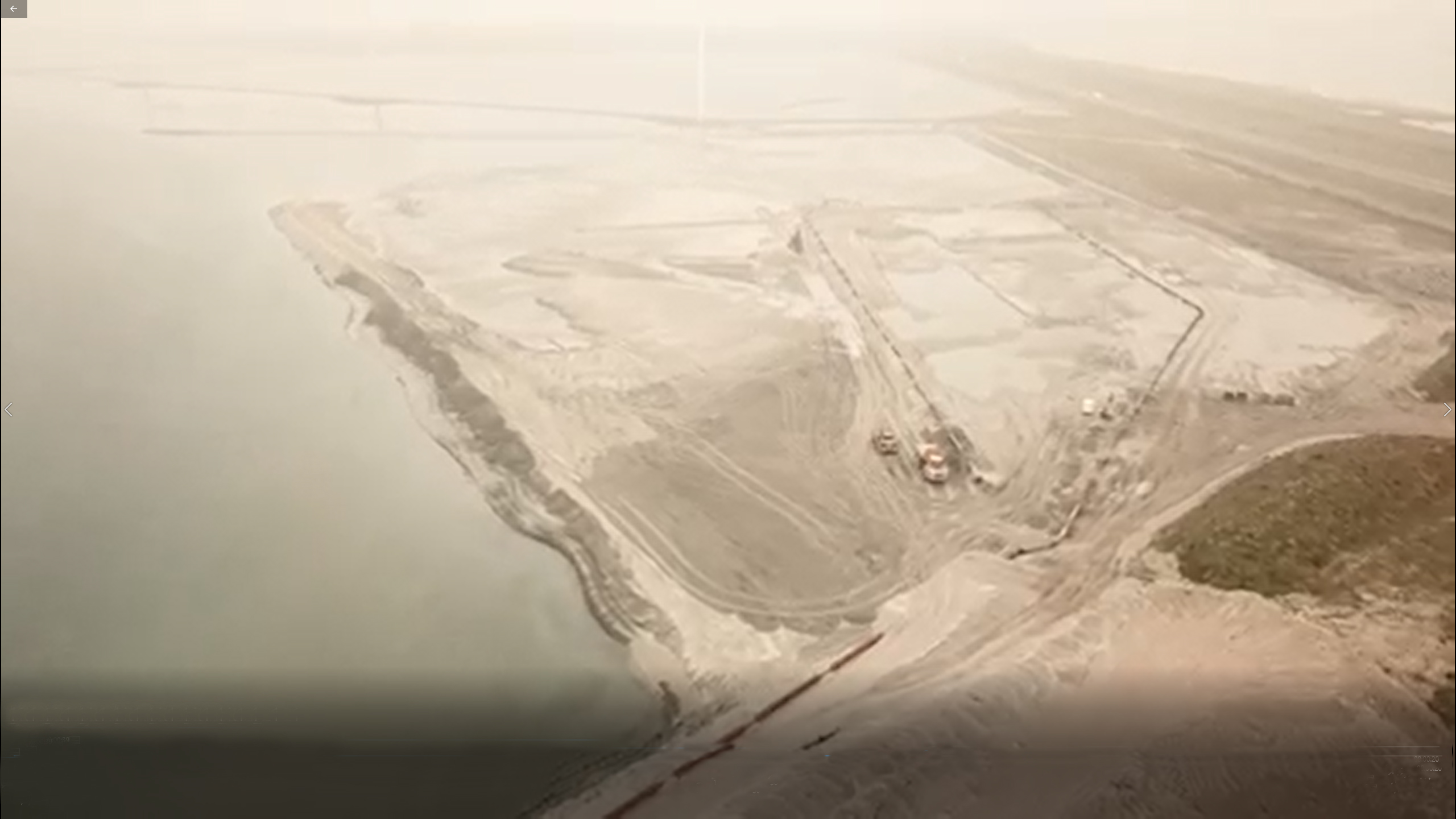 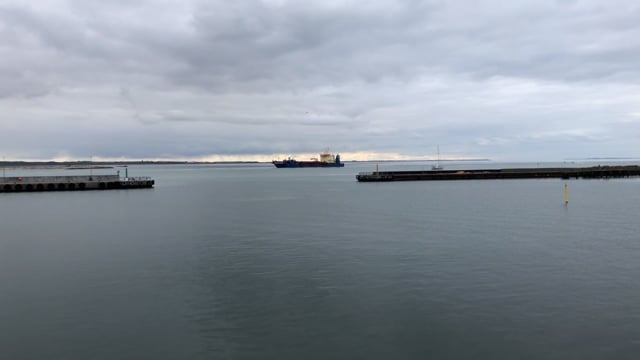 Bulk cargo – for storage at the port or direct delivery to the customer – is handled via customised logistics arrangements. Cargo varies from bulk cargo to general cargo and mixed cargo in big bags.

Project cargo in numerous variants is transported to the project facilities, consisting of a heavy-lift quay and ample space for handling the main components of wind turbines and the like.

There is a long tradition of handling liquid bulk goods such as oil and chemicals at the Port of Thyboron. The cargo arrives in tankers and is handled via specially designed logistics systems.

The construction industry is supplied with first-class raw materials from the gravel terminal at the Port of Thyboron. The terminal is a good example of how good port infrastructure can promote stable growth.

Specially designed port facilities for logistics optimisation, established in close cooperation between the port and customers, are the best way of ensuring efficient cargo handling. There are numerous examples of this at this Danish North Sea port.