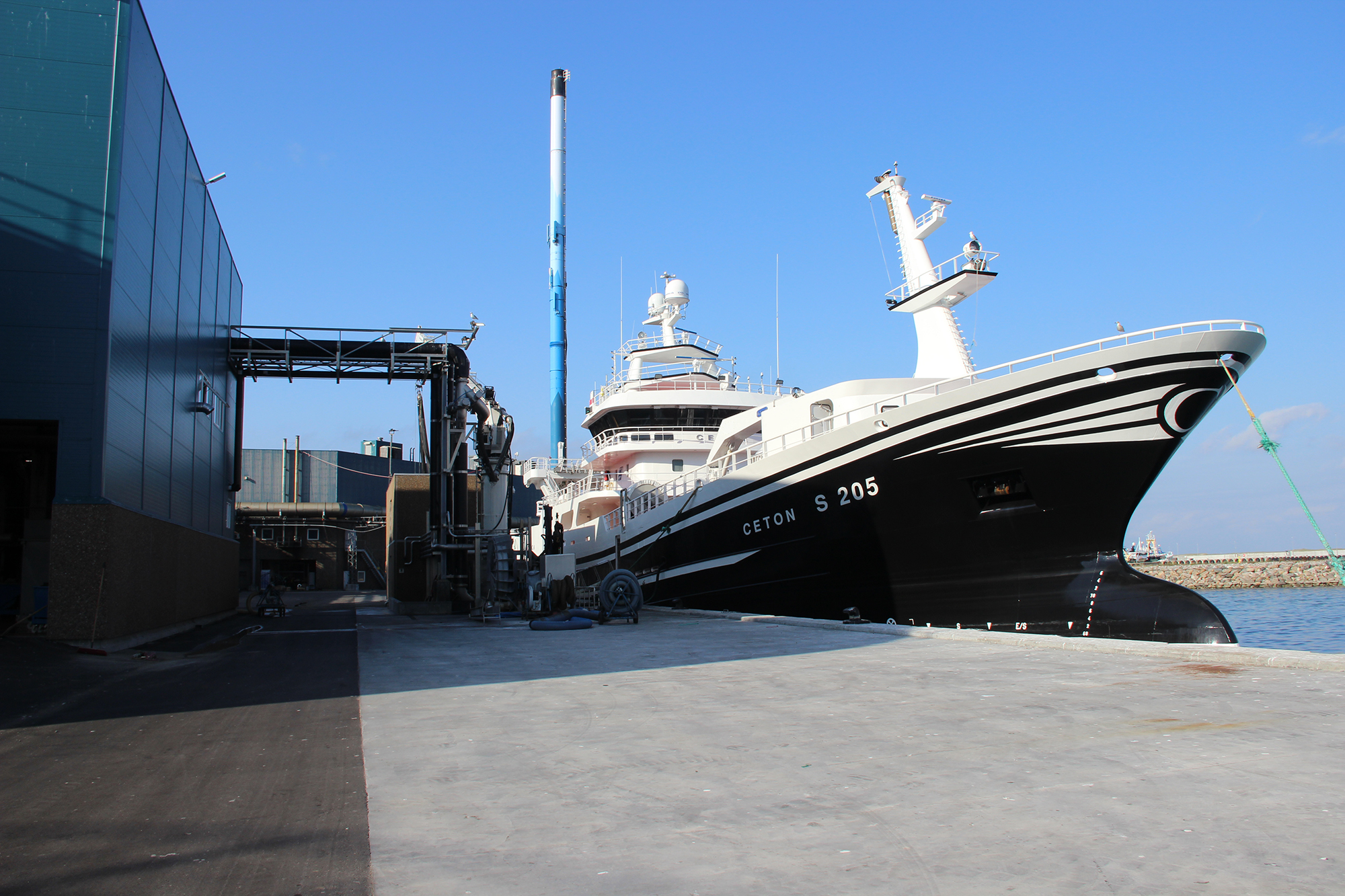 The Port of Thyboron has renovated the entire quay adjacent to the TripleNine A/S fishmeal factory, and the factory has invested in new high capacity discharging facilities. The combined result is outstanding working conditions that eliminate waiting time during discharging.

Today, industrial fishermen can benefit from the new and state-of-the-art discharging facilities in Thyboron, which are now completely ready. The construction work, which started in 2018 and was completed in summer 2020, has proceeded as planned without any stoppages. The industrial fishermen have been able to discharge fish at the fishmeal and fish oil factory throughout the entire construction period, with production running without interruption.

The Port of Thyboron and TripleNine A/S have joined forces to establish completely unique discharging facilities at one of the world’s biggest production facilities within the fishmeal and fish oil industry. The Port of Thyboron has invested DKK 40 million in the new 290-metre-long quay, while TripleNine A/S has invested DKK 35 million in brand-new landing facilities. The result is a modern and highly efficient discharging plant for industrial fishermen.

Everything has been designed with industrial fishermen in mind to provide perfect working conditions at the port. The approach to the quay has been simplified, as the old discharging piers have been removed and replaced by 160 metres of brand-new quay. The lay-out of the new quay area allows industrial fishermen to restock their vessels and even have service work carried out at the same time as their catches are being discharged. The new quay provides easy access for maritime service companies, which can perform work during discharging operations.

The harbour basin has been deepened, so that the water depth at the new quay is now nine metres. The quay has been prepared for a water depth of 10 metres as a future-proofing measure.
The Port of Thyboron is still working hard to have Thyborøn Kanal deepened to a depth of 10 metres during 2021. Since June 2019, enquiries regarding environmental approval have been submitted – the so-called environmental impact assessments – which will have a decisive bearing on when the dredging can start.

The new discharging facilities have resulted in an increased pace of activity. Discharging is considerably faster today, with two parallel draining plants which can remove as much as 400 tonnes an hour. By comparison, the factory used to receive 150 tonnes an hour. The increase will make a big difference in terms of how quickly vessels can return to sea.

Supplies can also be delivered much faster. The local water company is now able to supply fresh water at an impressive 160 cubic metres an hour, while the bunker fuel supplier Nordic Marine Oil has built a new MGO tank system that increases capacity by 1,900 cubic metres and links the existing plants together. In total, there are currently three flexible solutions for supplying bunker fuel at the new quay in Thyboron. Five new self-service stands with a bunker fuel capacity of 600 litres/minute are installed along the new quay. Moreover, the bunker capacity from the stands can be increased to 1,500 litres/minute by connecting three-inch pipes from Nordic Marine Oil or via bunker ships that deliver fuel where a vessel happens to be berthed.

In addition to the 160 quay metres of discharging quay, which has been named Sperlingkaj, a further 130 metres of new quay, called Oliekaj, have been built in connection with the construction project, which can be used for bunker fuel deliveries, but also as a waiting berth for industrial fishing vessels when there are no imminent fuel deliveries on the way. Therefore, there is now plenty of space in the port for large pelagic fishing vessels in Thyboron.

Numerous industrial fishermen have already tried out the new landing quay in Thyboron. The entire construction project has taken place without any stoppages, and vessels have been discharging fish at the new discharging facilities for about six months after a brief running-in period at Christmas. It has been shown that the quay fully lives up to the expected discharging rate, and the first positive feedback on the use of the new discharging facilities has been received. In particular, the improved access for maritime services, for example for inspecting and repairing trawl nets and vessels, has been praised, just as the easy access for cranes has been described as being very positive at the new quay.

“We’re very happy that we made the decision to invest DKK 40 million in a new quay for industrial fishermen. It’s a fantastic facility, which is going to make a big difference to their working lives. Creating such unique working conditions has only been possible because the quay has been realised as a joint construction project between TripleNine A/S, the industrial fishermen and other stakeholders such as the bunker fuel company Nordic Marine Oil A/S and the local water company Lemvig Vand & Spildevand,” says Jesper Holt Jensen, Managing Director, Port of Thyboron, adding: “We’re very grateful for this collaborative effort.”

Unfortunately, there was no official inauguration of the new discharging facilities here in August as planned due to precautions relating to the corona pandemic, but hopefully it will be possible at a later date.

Find out more about the industrial fishing at Thyboron Port

The TripleNine A/S fishmeal factory in Thyboron produces large quantities of quality-assured raw materials such as fish meal and fish oil for feed products. The factory has a quayside location, and fish are pumped directly from fishing vessels into the factory’s production facility with gentle handling.